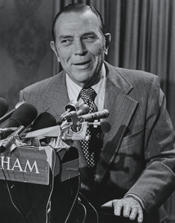 SISK, Bernice Frederic, Representative from California; born in Montague, Tex., December 14, 1910; at the age of six years moved with his parents to Donley County, Tex.; attended the Whitefish School and high school at Abernathy and Meadow, Tex.; attended Abilene Christian College 1929-1931; assisted his father in the operation of a cotton farm; moved to the San Joaquin Valley of California in 1937 and was employed in a food processing plant until 1941; served as a civilian flight dispatcher at the Sequoia Air Force training field, Visalia, Calif., from 1941 to 1945; employed with LeMoss-Smith Tire Co. in Fresno, Calif., 1945-1954; elected as a Democrat to the Eighty-fourth and to the eleven succeeding Congresses (January 3, 1955-January 3, 1979); was not a candidate for reelection in 1978 to the Ninety-sixth Congress; died October 25, 1995.
Courtesy of Biographical Directory of the United States Congress
Next page