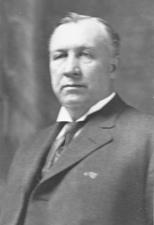 SMITH, Hoke, a Senator from Georgia; born in Newton, Catawba County, N.C., September 2, 1855; educated principally by his father, a professor at the University of North Carolina at Chapel Hill; studied law in Atlanta, Ga.; admitted to the bar in 1873 and commenced practice in Atlanta, Ga.; became owner of the Atlanta Evening Journal in 1887 and served as editor and president until 1900; appointed Secretary of the Interior in the Cabinet of President Grover Cleveland and served from 1893 to 1896; resumed the practice of law in Atlanta, Ga.; president of the Atlanta Board of Education 1896-1907; Governor of Georgia 1907-1909; unsuccessful candidate for renomination in 1908; again Governor from July 1911, until his resignation in November 1911, having previously been elected Senator; elected as a Democrat to the United States Senate on July 12, 1911, to fill the vacancy caused by the death of Alexander S. Clay, but did not assume these duties until later, preferring to continue as Governor; reelected to the Senate in 1914 and served from November 16, 1911, to March 3, 1921; unsuccessful candidate for renomination in 1920; chairman, Committee on Education and Labor (Sixty-third through Sixty-fifth Congresses), Committee on Expenditures in the Treasury Department (Sixth-sixth Congress); resumed the practice of his profession in Washington, D.C., and Atlanta, Ga.; died in Atlanta, Ga., November 27, 1931; interment in Oakland Cemetery.
Courtesy of Biographical Directory of the United States Congress
Next page