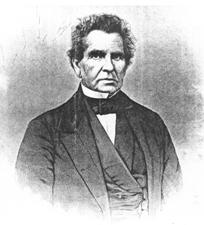 Representative and a Senator from Indiana; born on Smith's Island, near Trenton, N.J., October 23, 1794; attended the common schools; moved west, eventually settling in Lawrenceburg, Ind., in 1818; studied law; admitted to the bar in 1820 and commenced practice in Connersville, Ind.; member, State house of representatives 1822-1824; prosecuting attorney for the third judicial district 1824-1825; elected to the Twentieth Congress (March 4, 1827-March 3, 1829); unsuccessful candidate for reelection in 1828; elected as a Whig to the United States Senate and served from March 4, 1837, to March 3, 1843; chairman, Committee on Engrossed Bills (Twenty-sixth Congress), Committee on Public Lands (Twenty-seventh Congress); unsuccessful candidate for reelection; moved to Indianapolis, Ind., and resumed the practice of law; declined to be a candidate for governor of Indiana in 1845; engaged in the railroad business in Indianapolis; died in Indianapolis, Ind., March 19, 1859; interment in Crown Hill Cemetery.
Courtesy of Biographical Directory of the United States Congress
Next page