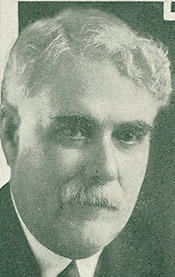 SPROUL, Elliott Wilford, Representative from Illinois; born in Apohaqui, Kings County, New Brunswick, Canada, December 28, 1856; attended the public schools; moved to Boston, Mass., in 1879 and to Chicago, Ill., in 1880, and engaged in the building and contracting business; was naturalized in 1886; member of the Chicago City Council 1896-1899; delegate to the Republican National Convention in 1920; member of the board of directors of the Chicago Public Library 1919-1921; elected as a Republican to the Sixty-seventh and to the four succeeding Congresses (March 4, 1921-March 3, 1931); unsuccessful candidate for reelection in 1930 to the Seventy-second Congress; resided in Chicago, Ill., until his death there on June 22, 1935; interment in Mount Hope Cemetery.
Courtesy of Biographical Directory of the United States Congress
Next page