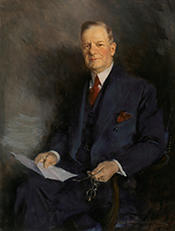 STEAGALL, Henry Bascom, Representative from Alabama; born in Clopton, Dale County, Ala., May 19, 1873; attended the common schools and the Southeast Alabama Agricultural School at Abbeville; was graduated from the law department of the University of Alabama at Tuscaloosa in 1893; was admitted to the bar the same year and commenced practice in Ozark, Ala.; county solicitor of Dale County 1902-1908; member of the State house of representatives in 1906 and 1907; member of the State Democratic executive committee 1906-1910; prosecuting attorney of the third judicial circuit 1907-1914; delegate to the Democratic National Convention in 1912; elected as a Democrat to the Sixty-fourth and to the fourteen succeeding Congresses and served from March 4, 1915, until his death in Washington, D.C., November 22, 1943; chairman, Committee on Banking and Currency (Seventy-second through Seventy-eighth Congresses); co-sponsor of the Glass-Steagall Act of 1932; interment in the City Cemetery, Ozark, Ala.
Courtesy of Biographical Directory of the United States Congress
Next page