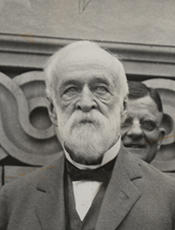 STEDMAN, Charles Manly, Representative from North Carolina; born in Pittsboro, Chatham County, N.C., January 29, 1841; moved with his parents to Fayetteville, N.C., in 1853; attended Pittsboro Academy and Donaldson Academy at Fayetteville; was graduated from the University of North Carolina at Chapel Hill in 1861; during the Civil War served as a private in the Fayetteville Independent Light Infantry Company, First North Carolina Regiment, and later as major in the Forty-fourth North Carolina Regiment; returned to Chatham County and taught school at Pittsboro one year; studied law; was admitted to the bar in 1865 and commenced practice in Wilmington, N.C., in 1867; delegate to the Democratic National Convention in 1880; Lieutenant Governor of North Carolina 1884-1888; unsuccessful candidate for nomination as Governor in 1888 and again in 1903; moved to Asheville, N.C., in 1891, to Greensboro, N.C., in 1898, and continued the practice of law; president of the North Carolina Bar Association in 1900 and 1901; director of the North Carolina Railroad in 1909 and 1910, during which time he served as president; trustee of the University of North Carolina 1899-1915; elected as a Democrat to the Sixty-second and to the nine succeeding Congresses and served from March 4, 1911, until his death in Washington, D.C., September 23, 1930; interment in Cross Creek Cemetery, Fayetteville, N.C.
Courtesy of Biographical Directory of the United States Congress
Next page