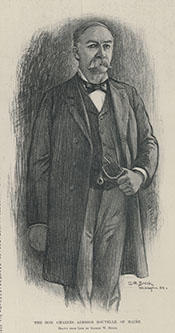 Representative from Maine; born in Damariscotta, Lincoln County, Maine, February 9, 1839; attended the public schools at Brunswick and the Yarmouth Academy; adopted the profession of shipmaster; in the spring of 1862 volunteered and was appointed acting master in the United States Navy; served in the North and South Atlantic and West Gulf Squadrons; promoted to lieutenant, May 5, 1864; participated in the capture of Mobile and in receiving surrender of the Confederate Fleet; afterwards assigned to command of naval forces in Mississippi Sound; honorably discharged January 14, 1866; engaged in business in New York; became managing editor of the Bangor (Maine) Whig and Courier in 1870 and purchased controlling ownership in 1874; delegate to the Republican National Convention at Cincinnati in 1876; elected as a Republican to the Forty-eighth and to the nine succeeding Congresses and served from March 4, 1883, until his resignation, March 3, 1901, before the commencement of the Fifty-seventh Congress, to which he had been reelected; chairman, Committee on Naval Affairs (Fifty-first Congress and Fifty-fourth through Fifty-sixth Congresses); by joint resolution of Congress on January 16, 1901, was placed on the retired list of the Navy, with the rank of captain; died in Waverley, Middlesex County, Mass., May 21, 1901; interment in Mount Hope Cemetery, Bangor, Maine.
Courtesy of Biographical Directory of the United States Congress
Next page