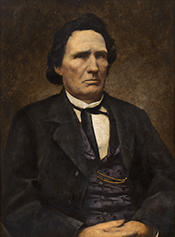 A Representative from Pennsylvania; born in Danville, Caledonia County, Vt. April 4, 1792; attended Peacham Academy and the University of Vermont at Burlington; was graduated from Dartmouth College, Hanover, N.H., in 1814; moved to Pennsylvania in 1815; studied law; was admitted to the bar in 1816 and commenced practice in Gettysburg; member of the State house of representatives 1833-1835, 1837, and 1841; delegate to the State constitutional convention in 1838; appointed as a canal commissioner in 1838; moved to Lancaster, Pa., in 1842; elected as a Whig to the Thirty-first and Thirty-second Congresses (March 4, 1849-March 3, 1853); elected as a Republican to the Thirty-sixth and to the four succeeding Congresses and served from March 4, 1859, until his death; chairman, Committee on Ways and Means (Thirty-seventh and Thirty-eighth Congresses), Committee on Appropriations (Thirty-ninth and Fortieth Congresses); one of the managers appointed by the House of Representatives in 1868 to conduct the impeachment proceedings against Andrew Johnson, President of the United States; died in Washington, D.C., on August 11, 1868; lay in state in the Rotunda of the U.S. Capitol, August 13-14, 1868; interment in Shreiner's Cemetery, Lancaster, Pa.
Courtesy of Biographical Directory of the United States Congress
Next page