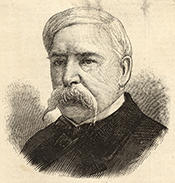 SWANN, Thomas, Representative from Maryland; born in Alexandria, Va., February 3, 1809; attended Columbian College (now George Washington University), Washington, D.C., and the University of Virginia at Charlottesville; studied law; was appointed by President Jackson as secretary of the United States Neapolitan Commission; moved to Baltimore, Md., in 1834; director and president of the Baltimore & Ohio Railroad 1847-1853; president of the Northwestern Virginia Railroad; mayor of Baltimore 1856-1860; elected by the Union Party as Governor of Maryland and served from 1865 to 1869; elected as a Democrat to the United States Senate in 1866, but did not serve, preferring to continue as Governor; elected as a Democrat to the Forty-first and to the four succeeding Congresses (March 4, 1869-March 3, 1879); chairman, Committee on Foreign Affairs (Forty-fourth and Forty-fifth Congresses); died on his estate, Morven Park, near Leesburg, Va., July 24, 1883; interment in Greenmount Cemetery, Baltimore, Md.
Courtesy of Biographical Directory of the United States Congress
Next page