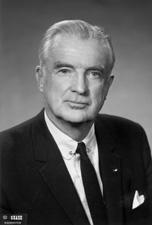 SYMINGTON, William Stuart (Stuart), (father of James Wadsworth Symington, son-in-law of James Wadsworth), a Senator from Missouri; born in Amherst, Hampshire County, Mass., June 26, 1901; soon after his birth the family moved to Baltimore, Md.; attended the public schools; enlisted as a private in the United States Army at seventeen years of age and was discharged as a second lieutenant; graduated from Yale University in 1923; reporter on a Baltimore newspaper; moved to Rochester, N.Y., and worked as an iron moulder and lathe operator 1923-1926, studying mechanical and electrical engineering at night and by correspondence; executive with several radio and steel companies 1926-1937; moved to St. Louis, Mo., and became president of the Emerson Electric Manufacturing Co. 1938-1945; chairman, Surplus Property Board 1945; Surplus Property Administrator 1945-1946; Assistant Secretary of War for Air 1946-1947; first Secretary of the Air Force 1947-1950; chairman of National Security Resources Board 1950-1951; Reconstruction Finance Corporation Administrator 1951-1952, from which office he resigned to run for nomination as United States Senator; elected as a Democrat to the United States Senate in 1952; reelected in 1958, 1964 and 1970 and served from January 3, 1953, until his resignation on December 27, 1976; was not a candidate for reelection in 1976; unsuccessful candidate for the Democratic presidential nomination in 1960; lived in New Canaan, Ct., until his death, December 14, 1988; interred in a crypt in Washington National Cathedral, Washington, D.C.
Courtesy of Biographical Directory of the United States Congress
Next page