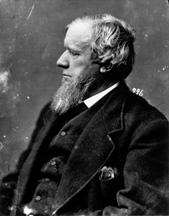 THURMAN, Allen Granberry, Representative and a Senator from Ohio; born in Lynchburg, Va., November 13, 1813; moved with his parents to Chillicothe, Ohio, in 1819; attended the Chillicothe Academy; private secretary to the Governor 1834; studied law; admitted to the bar in 1835 and practiced in Ross County, Ohio; elected as a Democrat to the Twenty-ninth Congress (March 4, 1845-March 3, 1847); declined to be a candidate for renomination in 1846; resumed the practice of law; associate justice of the supreme court of Ohio 1851-1854, chief justice 1854-1856; unsuccessful Democratic candidate for governor of Ohio in 1867; elected as a Democrat to the United States Senate in 1868; reelected in 1874 and served from March 4, 1869, to March 3, 1881; served as President pro tempore of the Senate during the Forty-sixth Congress; chairman, Committee on Private Land Claims (Forty-second through Forty-fifth Congresses), Committee on the Judiciary (Forty-sixth Congress); appointed a member of the Electoral Commission to decide the contests in various States in the presidential election of 1876; unsuccessful candidate for reelection to the United States Senate in 1881; resumed the practice of law in Columbus, Ohio; appointed by President James Garfield a member of the international monetary conference in Paris in 1881; unsuccessful candidate for Vice President of the United States on the Democratic ticket in 1888; died in Columbus, Franklin County, Ohio, December 12, 1895; interment in Green Lawn Cemetery.
Courtesy of Biographical Directory of the United States Congress
Next page