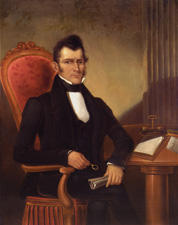 TIPTON, John, a Senator from Indiana; born near Sevierville, Sevier County, Tenn., August 14, 1786; received a limited schooling; moved to Harrison County, Ind., in 1807 and engaged in agricultural pursuits; served with the Yellow Jackets in the Tippecanoe campaign and subsequently attained the rank of brigadier general of militia; sheriff of Harrison County, Ind., 1816-1819; member, State house of representatives 1819-1823; one of the commissioners to select a site for a new capital for Indiana in 1820; commissioner to determine the boundary line between Indiana and Illinois 1821; appointed United States Indian agent for the Pottawatamie and Miami tribes 1823; laid out the city of Logansport, Ind., in 1828; elected as a Jacksonian (later Democrat) to the United States Senate on December 9, 1831, to fill the vacancy caused by the death of James Noble; reelected in 1832 and served from January 3, 1832, to March 3, 1839; due to poor health declined to be a candidate for reelection in 1838; chairman, Committee on Roads and Canals (Twenty-fifth Congress), Committee on Indian Affairs (Twenty-fifth Congress); died in Logansport, Cass County, Ind., on April 5, 1839; interment in Mount Hope Cemetery.
Courtesy of Biographical Directory of the United States Congress
Next page