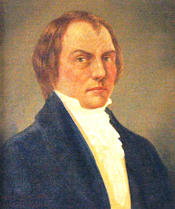 TOD, John, Representative from Pennsylvania; born in Hartford, Conn., in 1779; attended the common schools and Yale College; moved to Bedford, Pa., in 1800; taught school while studying law; was admitted to the bar in 1803 and commenced practice in Bedford, Pa.; clerk to the county commissioners of Bedford County in 1806 and 1807; member of the State house of representatives 1810-1813, serving twice as speaker; served in the State senate and acted as president 1814-1816; elected to the Seventeenth and Eighteenth Congresses and served from March 4, 1821, until his resignation in 1824; chairman, Committee on Manufactures (Seventeenth and Eighteenth Congresses); presiding judge of the court of common pleas for the sixteenth judicial district 1824-1827; appointed associate judge of the State supreme court in 1827; died in Bedford, Bedford County, Pa., March 27, 1830; interment in Bedford Cemetery.
Courtesy of Biographical Directory of the United States Congress
Next page