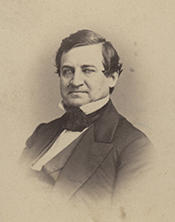 TREMAIN, Lyman, Representative from New York; born in Durham, Greene County, N.Y., June 14, 1819; attended the common schools and Kinderhook Academy; studied law; was admitted to the bar in 1840 and commenced practice in Durham, N.Y.; elected supervisor of Durham in 1842; appointed district attorney in 1844; elected surrogate and county judge of Greene County in 1846; unsuccessful candidate for reelection in 1851; moved to Albany, N.Y., in 1853 and practiced law; elected, as a Democrat, attorney general of New York in 1858; unsuccessful candidate for reelection in 1860; unsuccessful Republican candidate for Lieutenant Governor of New York in 1862; member of the State assembly 1866-1868, serving as speaker in 1867; elected as a Republican to the Forty-third Congress (March 4, 1873-March 3, 1875); was not a candidate for renomination in 1874; resumed the practice of law in Albany; died in New York City, while on a visit, November 30, 1878; interment in the Rural Cemetery, Albany, N.Y.
Courtesy of Biographical Directory of the United States Congress
Next page