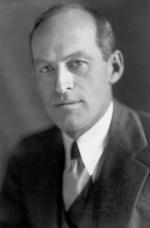 TYDINGS, Millard Evelyn, (father of Joseph Davies Tydings), Representative and a Senator from Maryland; born in Havre de Grace, Harford County, Md., April 6, 1890; attended the public schools of Harford County; graduated from Maryland Agricultural College (now the University of Maryland) in 1910; engaged in civil engineering with the Baltimore Ohio Railroad in West Virginia in 1911; studied law at the University of Maryland Law School, Baltimore, Md.; admitted to the bar and commenced practice in Havre de Grace in 1913; member, State house of delegates 1916-1921; speaker of the house 1920-1922; served as a private on the Mexican border at Eagle Pass, Tex., 1916; enlisted as a private in the First World War in 1917; promoted to lieutenant colonel and division machine-gun officer in 1918; served in Germany with the Army of Occupation; discharged from the service in 1919; author; member, State senate 1922-1923; elected as a Democrat to the Sixty-eighth and Sixty-ninth Congresses (March 4, 1923-March 3, 1927); was not a candidate for renomination in 1926, having become a candidate for United States Senator; elected as a Democrat to the United States Senate in 1926, 1932, 1938 and 1944 and served from March 4, 1927, to January 3, 1951; was an unsuccessful candidate for reelection in 1950; chairman, Committee on Territories and Insular Possessions (Seventy-third through Seventy-ninth Congresses), Committee on Armed Services (Eighty-first Congress); nominated in 1956 as Democratic candidate for the United States Senate but withdrew before election due to ill health; engaged in the practice of law in Washington, D.C., and Baltimore, Md.; died at his farm, Oakington, near Havre de Grace, Md., February 9, 1961; interment in Angel Hill Cemetery.
Courtesy of Biographical Directory of the United States Congress
Next page