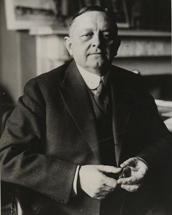 UNDERWOOD, Oscar Wilder, (grandson of Joseph Rogers Underwood), Representative and a Senator from Alabama; born in Louisville, Jefferson County, Ky., May 6, 1862; attended the common schools, the Rugby School, Louisville, Ky., and the University of Virginia at Charlottesville; studied law; admitted to the bar in 1884 and commenced practice in Birmingham, Ala.; presented credentials as a Democratic Member-elect to the Fifty-fourth Congress and served from March 4, 1895, to June 9, 1896, when he was succeeded by Truman H. Aldrich, who contested his election; elected as a Democrat to the Fifty-fifth and to the eight succeeding Congresses (March 4, 1897-March 3, 1915); did not seek renomination in 1914, having become a candidate for Senator; minority whip (Fifty-sixth Congress); majority leader 1911-1915; chairman, Committee on Ways and Means (Sixty-second and Sixty-third Congresses); unsuccessful candidate for the Democratic presidential nomination in 1912 and 1924; elected as a Democrat to the United States Senate in 1914; reelected in 1920, and served from March 4, 1915, to March 3, 1927; declined to be a candidate for reelection in 1926; minority leader 1920-1923; chairman, Committee on Cuban Relations (Sixty-fourth and Sixty-fifth Congresses); represented the United States as a member of the Conference on Limitation of Armament in 1921 and 1922; represented the United States as a delegate to the Sixth International Conference of American States at Havana, Cuba, in 1928; retired to his estate, Woodlawn Mansion, near Accotink, Fairfax County, Va., and engaged in literary pursuits until his death there on January 25, 1929; interment in Woodlawn Cemetery, Birmingham, Ala.
Courtesy of Biographical Directory of the United States Congress
Next page