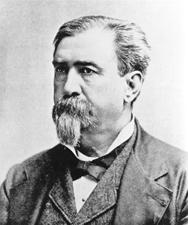 VOORHEES, Daniel Wolsey, (father of Charles Stewart Voorhees), Representative and a Senator from Indiana; born in Liberty Township, Butler County, Ohio, September 26, 1827; moved with his parents to Indiana in early childhood; attended the common schools of Veedersburg, Ind.; graduated from Indiana Asbury (now De Pauw) University at Greencastle in 1849; studied law; admitted to the bar in 1851 and commenced practice in Covington, Ind.; moved to Terre Haute and continued the practice of law; unsuccessful candidate for election in 1856 to the Thirty-fifth Congress; United States district attorney for Indiana 1858-1861; elected as a Democrat to the Thirty-seventh and Thirty-eighth Congresses (March 4, 1861-March 3, 1865); presented credentials as a Member-elect to the Thirty-ninth Congress and served from March 4, 1865, to February 23, 1866, when he was succeeded by Henry D. Washburn, who contested the election; elected to the Forty-first and Forty-second Congresses (March 4, 1869-March 3, 1873); unsuccessful candidate for reelection in 1872 to the Forty-third Congress; appointed and subsequently elected as a Democrat to the United States Senate to fill the vacancy caused by the death of Oliver H.P.T. Morton; reelected in 1885 and again in 1891, and served from November 6, 1877, to March 3, 1897; unsuccessful candidate for reelection; chairman, Committee on the Library (Forty-sixth Congress), Committee on Finance (Fifty-third Congress); died in Washington, D.C., April 10, 1897; interment in Highland Lawn Cemetery, Terre Haute, Ind.
Courtesy of Biographical Directory of the United States Congress
Next page