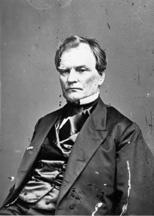 WADE, Benjamin Franklin, (brother of Edward Wade), a Senator from Ohio; born in Feeding Hills, near Springfield, Hampden County, Mass., October 27, 1800; received his early education from his mother; moved with his parents to Andover, Ohio, in 1821; taught school; studied medicine in Albany, N.Y., 1823-1825; returned to Ohio; studied law; admitted to the bar in 1828 and commenced practice in Jefferson, Ashtabula County, Ohio; prosecuting attorney of Ashtabula County 1835-1837; member, State senate 1837-1838, 1841-1842; judge of the third judicial court of Ohio 1847-1851; elected as a Whig to the United States Senate to fill the vacancy in the term commencing March 4, 1851, caused by the failure of the legislature to elect; reelected as a Republican in 1856 and 1863 and served from March 15, 1851, to March 3, 1869; unsuccessful candidate for renomination in 1868; served as President pro tempore of the Senate during the Thirty-ninth and Fortieth Congresses; chairman, Committee on Territories (Thirty-seventh, Thirty-eighth, and Thirty-ninth Congresses); unsuccessful Republican candidate for the vice presidential nomination in 1868; resumed the practice of law in Jefferson, Ohio, in 1869; appointed a government director of the Union Pacific Railroad; member of the Santo Domingo Commission in 1871; died in Jefferson, Ashtabula County, Ohio, on March 2, 1878; interment in Oakdale Cemetery.
Courtesy of Biographical Directory of the United States Congress
Next page