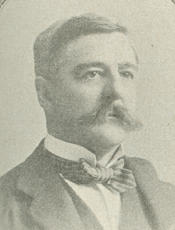 WADSWORTH, James Wolcott, (father of James Wolcott Wadsworth, Jr.), Representative from New York; born in Philadelphia, Pa., October 12, 1846; attended Hopkins Grammar School, New Haven, Conn.; served in the Civil War as captain on the staff of Gen. G.K. Warren and was made brevet major; after the war settled in Geneseo, N.Y., and engaged in agricultural pursuits; supervisor of Geneseo 1873-1876; member of the State assembly in 1878 and 1879; State comptroller in 1880 and 1881; elected as a Republican to the Forty-seventh Congress to fill the vacancy caused by the resignation of Eldridge G. Lapham; reelected to the Forty-eighth Congress and served from November 8, 1881, to March 3, 1885; elected to the Fifty-second and to the seven succeeding Congresses (March 4, 1891-March 3, 1907); chairman, Committee on Agriculture (Fifty-fourth through Fifty-ninth Congresses); unsuccessful candidate for reelection in 1906 to the Sixtieth Congress; elected president of the board of managers for the National Home for Disabled Volunteer Soldiers; engaged in agricultural pursuits and interested in livestock; member of the New York State Constitutional Convention in 1914; president of the Genesee Valley National Bank; died in Washington, D.C., on December 24, 1926; interment in the family plot in Temple Hill Cemetery, Geneseo, N.Y.
Courtesy of Biographical Directory of the United States Congress
Next page