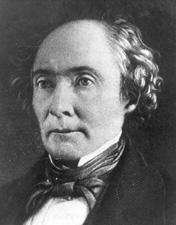 WALKER, Robert John, a Senator from Mississippi; born in Northumberland, Pa., July 19, 1801; graduated from the University of Pennsylvania at Philadelphia in 1819; studied law; admitted to the bar in 1821 and commenced practice in Pittsburgh, Pa., the following year; moved to Natchez, Miss., in 1826 and continued the practice of law; elected as a Democrat to the United States Senate; reelected, and served from March 4, 1835, to March 5, 1845, when he resigned; chairman, Committee on Public Lands (Twenty-fourth through Twenty-sixth Congresses); Secretary of the Treasury in the Cabinet of President James K. Polk 1845-1849; declined the mission to China tendered by President Franklin Pierce in 1853; resumed the practice of law; appointed Governor of Kansas Territory in April 1857, but resigned in December 1857; United States financial agent to Europe 1863-1864; again engaged in the practice of law at Washington, D.C., and died there November 11, 1869; interment in Oak Hill Cemetery.
Courtesy of Biographical Directory of the United States Congress
Next page