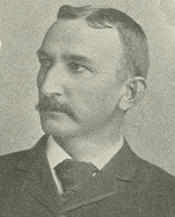 WANGER, Irving Price, Representative from Pennsylvania; born in North Coventry, Chester County, Pa., March 5, 1852; attended the public schools of North Coventry and Pottstown, and Hill School in Pottstown; deputy prothonotary of Chester County in 1871; commenced the study of law at Norristown in 1872; deputy prothonotary of Montgomery County 1873-1875; was admitted to the bar December 18, 1875, and commenced the practice of law in Norristown, Pa.; elected burgess of Norristown in 1878; delegate to the Republican National Convention in 1880; elected district attorney of Montgomery County in 1880 and again in 1886; served as chairman of the Montgomery County Republican committee in 1889; unsuccessful candidate for election in 1890 to the Fifty-second Congress; elected as a Republican to the Fifty-third and to the eight succeeding Congresses (March 4, 1893-March 3, 1911); chairman, Committee on Expenditures in the Post Office Department (Fifty-fifth through Sixty-first Congresses); unsuccessful candidate for reelection in 1910 to the Sixty-second Congress; lived for a short time in Wilmington, Del.; resumed the practice of his profession in Media and Norristown, Pa., in 1920; died in Norristown, Pa., January 14, 1940; interment in Mount Zion Cemetery, Pottstown, Pa.
Courtesy of Biographical Directory of the United States Congress
Next page