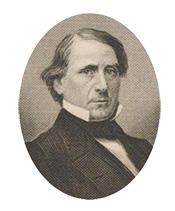 WASHBURNE, Elihu Benjamin, (brother of Israel Washburn, Jr., Cadwallader Colden Washburn, and William Drew Washburn), Representative from Illinois; born in Livermore, Androscoggin County, Maine, September 23, 1816; attended the common schools; printers apprentice; assistant editor of the Kennebec Journal, Augusta; studied law at Kents Hill Seminary in 1836 and at Harvard Law School in 1839; was admitted to the bar in 1840; moved to Galena, Jo Daviess County, Ill., in 1840 and commenced the practice of law; delegate to the Whig National Conventions in 1844 and 1852; unsuccessful candidate for election in 1848 to the Thirty-first Congress; elected as a Whig to the Thirty-third Congress and reelected as a Republican to the eight succeeding Congresses and served from March 4, 1853, to March 6, 1869, when he resigned; chairman, Committee on Commerce (Thirty-fourth and Thirty-sixth through Fortieth Congresses), Committee on Appropriations (Fortieth Congress); appointed as Secretary of State in the Cabinet of President Grant, but resigned a few days afterward to accept a diplomatic mission to France; upon the declaration of the Franco-Prussian War he protected with the American flag the Paris legations of the various German states; remained in Paris during the siege and was the only foreign minister who continued at his post during the days of the Commune; protected not only Germans but all the foreigners left by their ministers; served as Minister until 1877, when he returned and settled in Chicago, Ill.; engaged in literary pursuits; died in Chicago, Ill., October 23, 1887; interment in Greenwood Cemetery, Galena, Ill.
Courtesy of Biographical Directory of the United States Congress
Next page