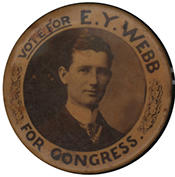 WEBB, Edwin Yates, Representative from North Carolina; born in Shelby, Cleveland County, N.C., May 23, 1872; attended the Shelby Military Institute, and was graduated from Wake Forest (N.C.) College in June 1893; studied law at the University of North Carolina at Chapel Hill in 1893 and 1894; was admitted to the bar in 1894 and commenced practice in Shelby; entered the University of Virginia Law School at Charlottesville in 1896 and completed a postgraduate course; member of the State senate in 1901; appointed a trustee of Wake Forest College in 1898; appointed trustee of the Agricultural and Mechanical College of Raleigh by the legislature in 1899 and served two years; chairman of the Democratic senatorial district in 1896; chairman of the Democratic county executive committee 1898-1902; temporary chairman of the Democratic State convention in 1900; elected as a Democrat to the Fifty-eighth and to the eight succeeding Congresses and served from March 4, 1903, to November 10, 1919, when he resigned to accept a judicial position; chairman, Committee on the Judiciary (Sixty-third through Sixty-fifth Congresses); one of the managers appointed by the House of Representatives in 1912 to conduct impeachment proceedings against Robert W. Archbald, judge of the United States Commerce Court; appointed United States district judge for the western district of North Carolina November 5, 1919, and served until his retirement March 1, 1948; died while visiting in Wilmington, N.C., February 7, 1955; interment in Sunset Cemetery, Shelby, N.C.
Courtesy of Biographical Directory of the United States Congress
Next page