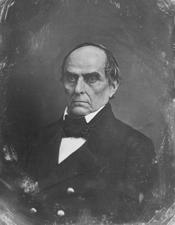 WEBSTER, Daniel, Representative from New Hampshire and Representative and a Senator from Massachusetts; born in Salisbury, N.H., January 18, 1782; attended district schools and Phillips Exeter Academy, Exeter, N.H.; graduated from Dartmouth College, Hanover, N.H., in 1801; principal of an academy at Fryeburg, Maine, in 1802; studied law; admitted to the bar in 1805 and commenced practice in Boscawen, near Salisbury, N.H.; moved to Portsmouth, N.H., in 1807 and continued the practice of law; elected as a Federalist from New Hampshire to the Thirteenth and Fourteenth Congresses (March 4, 1813-March 3, 1817); was not a candidate for reelection in 1816 to the Fifteenth Congress; moved to Boston, Mass., in 1816; achieved national fame as counsel representing Dartmouth College before the United States Supreme Court in the Dartmouth College case 1816-1819; delegate to the Massachusetts State constitutional convention in 1820; elected from Massachusetts to the Eighteenth, Nineteenth, and Twentieth Congresses and served from March 4, 1823, to May 30, 1827; did not serve in the Twentieth Congress; chairman, Committee on the Judiciary (Eighteenth and Nineteenth Congresses); elected as Adams (later Anti-Jacksonian) on June 8, 1827, to the United States Senate for the term beginning March 4, 1827, credentials presented on December 3, 1827, and took oath of office on December 17, 1827; reelected as a Whig in 1833 and 1839 and served until his resignation, effective February 22, 1841; chairman, Committee on Finance (Twenty-third and Twenty-fourth Congresses); unsuccessful Whig candidate for president in 1836; appointed Secretary of State by President William Henry Harrison and again by President John Tyler and served from 1841 to 1843; again elected as a Whig to the United States Senate and served from March 4, 1845, to July 22, 1850, when he resigned; appointed Secretary of State by President Millard Fillmore and served from July 22, 1850, until his death in Marshfield, Massachusetts., October 24, 1852; interment in the Winslow Cemetery.
Courtesy of Biographical Directory of the United States Congress
Next page