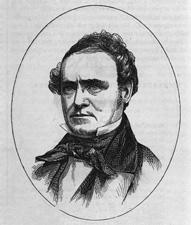 WELLER, John B., Representative from Ohio and a Senator from California; born in Hamilton County, Ohio, February 22, 1812; attended the public schools and Miami University, Oxford, Ohio; studied law; admitted to the bar and practiced in Butler County, Ohio; prosecuting attorney of Butler County 1833-1836; elected as a Democrat from Ohio to the Twenty-sixth, Twenty-seventh, and Twenty-eighth Congresses (March 4, 1839-March 3, 1845); was not a candidate for renomination in 1844; served in the Mexican War 1846-1847; unsuccessful Democratic candidate for governor of Ohio in 1848; member of the commission to establish the boundary line between California and Mexico in 1849 and 1850; moved to California and engaged in the practice of law; elected as a Democrat from California to the United States Senate for the term commencing March 4, 1851, and served from January 30, 1852, to March 3, 1857; unsuccessful candidate for reelection; chairman, Committee on Military Affairs (Thirty-fourth Congress); Governor of California 1858-1860; appointed Minister to Mexico in 1860 and was recalled in 1861; moved to New Orleans, La., in 1867 and continued the practice of law; died in New Orleans, La., August 17, 1875; interment in Girod Street Cemetery; cemetery destroyed in 1959 and unclaimed remains commingled with 15,000 others and deposited beneath Hope Mausoleum, St. John's Cemetery, New Orleans, La.
Courtesy of Biographical Directory of the United States Congress
Next page