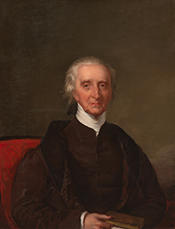 CARROLL, Charles (of Carrollton), (cousin of Charles Carroll, the Barrister, and Daniel Carroll), a Delegate and a Senator from Maryland; born in Annapolis, Md., September 19, 1737; attended the Jesuits College of Bohemia at Hermans Manor, Md., and the College of St. Omer in France; studied civil law at the College of Louis le Grand in Rheims, and common law in London; returned to Annapolis, Md., in 1765; delegate to the revolutionary convention of Maryland in 1775; Continental commissioner to Canada in 1776; member of the Board of War 1776-1777; Delegate to the Continental Congress 1776-1778; again elected to the Continental Congress in 1780, but declined to serve; was a signer of the Declaration of Independence; member, State senate 1777-1800; elected to the United States Senate in 1789; reelected in 1791 and served from March 4, 1789, to November 30, 1792, when, preferring to remain a State senator, he resigned because of a law passed by the Maryland legislature disqualifying the members of the State senate who held seats in Congress; retired to private life in 1801; involved in establishing the Baltimore & Ohio Railroad Company in 1828; died in Baltimore, Md., November 14, 1832; at the time of his death was the last surviving signer of the Declaration of Independence; interment in the chapel of Doughoregan Manor, near Ellicott City, Howard County, Md.
Courtesy of Biographical Directory of the United States Congress
Next page