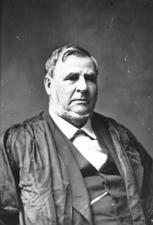 DAVIS, David, (cousin of Henry Winter Davis), a Senator from Illinois; born near Cecilton, Cecil County, Md., March 9, 1815; attended the public schools of Maryland; graduated from Kenyon College, Ohio, in 1832; studied law in Lenox, Mass., and at the law school in New Haven; admitted to the bar in 1835 and commenced practice in Pekin, Tazewell County, Ill.; moved to Bloomington, Ill., in 1836, and continued the practice of law; member, State house of representatives 1844; delegate to the State constitutional convention in 1847; judge of the eighth judicial circuit of Illinois 1848-1862; appointed by President Abraham Lincoln as an Associate Justice of the Supreme Court of the United States 1862-1877, when he resigned to become a Senator; candidate for nomination for president on the Liberal-Republican ticket in 1872; elected as an Independent to the United States Senate, and served from March 4, 1877, until March 3, 1883; was not a candidate for renomination in 1882; served as President pro tempore of the Senate during the Forty-seventh Congress; retired from public life; died in Bloomington, McLean County, Ill., June 26, 1886; interment in Evergreen Cemetery.
Courtesy of Biographical Directory of the United States Congress
Next page