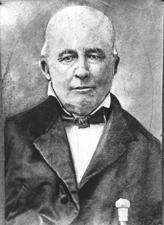 HENDRICKS, William, (uncle of Thomas Andrews Hendricks), Representative and a Senator from Indiana; born in Ligonier Valley, Westmoreland County, Pa., November 12, 1782; attended the common schools and graduated from Jefferson College (later Washington and Jefferson College), Washington, Pa., in 1810; taught school 1810-1812; studied law in Cincinnati, Ohio; admitted to the bar and practiced; moved to Madison, Indiana Territory, in 1813; became a printer and owner of the second printing press set up in the Territory; proprietor of the Western Eagle; elected to the territorial legislature in 1813 and 1814, and was chosen speaker of the Assembly in 1814; territorial printer; secretary of the first State constitutional convention in 1816; upon the admission of Indiana as a State into the Union was elected to the Fourteenth Congress; reelected to the Fifteenth, Sixteenth, and Seventeenth Congresses and served from December 11, 1816, until his resignation July 25, 1822, to become Governor; Governor of Indiana 1822-1825, when he resigned to become a Senator; elected to the United States Senate in 1824; reelected in 1830 and served from March 4, 1825, to March 3, 1837; unsuccessful candidate for reelection in 1836; chairman, Committee on Roads and Canals (Twenty-first through Twenty-fourth Congresses); resumed the practice of law in Madison, Ind.; trustee of Indiana University at Bloomington 1829-1840; died in Madison, Ind., May 16, 1850; interment in Fairmount Cemetery.
Courtesy of Biographical Directory of the United States Congress
Next page