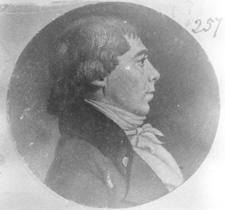 Representative from Virginia and a Senator from Mississippi; born at Mary Ann Furnace, near Hanover, York County, Pa., March 10, 1769; moved to Virginia as a child; attended Winchester Academy, Winchester, Va.; studied law; admitted to the bar in 1791 and commenced practice in Harrisonburg, Va.; held several local offices; elected to the Fifth and to the five succeeding Congresses (March 4, 1797-March 3, 1809); was not a candidate for renomination in 1808; chairman, Committee on Claims (Ninth and Tenth Congresses); moved to the Mississippi Territory; Governor of the Territory of Mississippi 1809-1817; Governor of the State of Mississippi 1817-1820; appointed to the United States Senate from Mississippi as a Democratic Republican to fill the vacancy caused by the resignation of Walter Leake; subsequently elected as a Jackson Republican and served from August 30, 1820, to September 25, 1825, when he resigned; chairman, Committee on Indian Affairs (Sixteenth Congress); again Governor of Mississippi, but stepped down due to ill health 1826; returned to Winchester, Va., in 1827; died at Jordan's Sulphur Springs, near Winchester, Va., on August 20, 1832; interment in Mount Hebron Cemetery, Winchester, Va.
Courtesy of Biographical Directory of the United States Congress
Next page