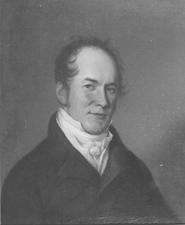 HOLMES, John, Representative from Massachusetts and a Senator from Maine; born in Kingston, Mass., March 14, 1773; attended the Kingston public schools; graduated from Rhode Island College (now Brown University), Providence, R.I., in 1796; studied law; admitted to the bar in 1799 and commenced practice in Alfred, Maine (then a district of Massachusetts); also engaged in literary pursuits; elected to the Massachusetts General Court in 1802, 1803, and 1812; elected to the State senate in 1813 and 1814; one of the commissioners under the treaty of Ghent to divide the islands of Passamaquoddy Bay between the United States and Great Britain 1816; elected from Massachusetts to the Fifteenth and Sixteenth Congresses and served from March 4, 1817, to March 15, 1820, when he resigned; chairman, Committee on Expenditures in the Department of State (Sixteenth Congress); delegate to the Maine constitutional convention; upon separation from Massachusetts and the admission of the State of Maine into the Union was elected as a Democratic Republican to the United States Senate from Maine and served from June 13, 1820, to March 3, 1827; again elected to the United States Senate, as an Adams Republican, to fill the vacancy caused by the resignation of Albion K. Parris and served from January 15, 1829, to March 3, 1833; chairman, Committee on Finance (Seventeenth Congress), Committee on Pensions (Twenty-first Congress); resumed law practice; member, State house of representatives 1836-1837; appointed United States attorney for the Maine district in 1841 and served until his death in Portland, Maine, July 7, 1843; interment in private tomb of Cotton Brooks, Eastern Cemetery.
Courtesy of Biographical Directory of the United States Congress
Next page