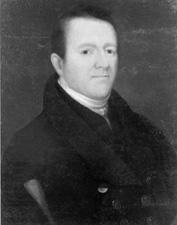 BARTON, David, a Senator from Missouri; born near Greeneville, N.C. (now Tennessee), December 14, 1783; read law; admitted to the Tennessee bar; moved to the Territory of Missouri in 1809; elected attorney general of the Territory in 1813; first circuit judge of Howard County in 1815 and presiding judge in 1816; member, Territorial house of representatives 1818 and served as speaker; member and president of the convention which formed the State constitution in 1820; upon the admission of Missouri as a State into the Union was elected as a Democratic Republican (later Adams-Clay Republican) to the United States Senate; reelected in 1825 as an Adams Democrat and served from August 10, 1821, to March 3, 1831; unsuccessful candidate for reelection as an Anti-Jacksonian in 1830; chairman, Committee on Public Lands (Eighteenth through Twenty-first Congresses); member, State senate 1834-1835; died in Boonville, Mo., on September 28, 1837; interment in Walnut Grove Cemetery.
Courtesy of Biographical Directory of the United States Congress
Next page