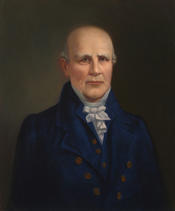 Representative and a Senator from North Carolina; born near Warrenton, Warren County, N.C., December 17, 1757; pursued classical studies and attended the College of New Jersey (now Princeton University); served in the Revolutionary War; elected to the State senate 1781, 1782, and 1784; moved to a plantation on the Roanoke River; elected in 1785 to the Continental Congress but declined to serve; elected to the Second and to the twelve succeeding Congresses and served from March 4, 1791, until December 13, 1815, when he resigned, having been elected Senator; Speaker of the House of Representatives (Seventh through Ninth Congresses); chairman, Committee on Revisal and Unfinished Business (Fifth Congress), Committee on Claims (Sixth Congress), Committee on Public Expenditures (Thirteenth Congress); elected as a Democratic Republican to the United States Senate on December 5, 1815, to fill the vacancy caused by the resignation of Francis Locke; reelected in 1819 and 1825 and served from December 13, 1815, until his resignation on November 14, 1828; served as President pro tempore of the Senate during the Nineteenth Congress; chairman, Committee on Foreign Relations (Fifteenth, Nineteenth and Twentieth Congresses), Committee to Audit and Control the Contingent Expenses (Seventeenth Congress); unsuccessful candidate for vice president of the United States in 1825; president of the State constitutional convention in 1835; presidential elector on the Democratic ticket in 1836; died at 'Buck Spring,' near Macon, Warren County, N.C., June 29, 1837; interment at 'Buck Spring.'
Courtesy of Biographical Directory of the United States Congress
Notice: By custom, the Speaker of the House rarely votes. Votes for MACON, Nathaniel may appear to be missing as a result.
Next page